Let’s focus on the 21st Century, shall we?

Previously titled “Mary’s Joy,” the solo performance explores the life of Mary Dyer, hanged in Boston June 1, 1660 for being a Quaker. That is a disputed assertion – she was actually banished for being a Quaker and executed, technically, for refusing to comply. But the fact is that it was the simple truth of her religious convictions that led to her martyrdom. Five years in, and I’m still learning about her, and about human nature. More here.

Adapted from the book, Powder: writing by women in the ranks from Vietnam to Iraq

This show was great – all women in the cast, a woman director, woman playwright AND a woman stage manager (the divine Crystal Munson). The producers were men, but they mostly stayed out of our hair, so that was fine. It was a joy working with Gloria Stroock and Meredith Bishop. We laughed a lot and I cried A LOT (going through a rough patch) and they were ALL incredilbly nurturing and supportive.

She put up with a lot, that Rose Kennedy did. I think I love theatre most because it satisfies my insatiable appetite for research. 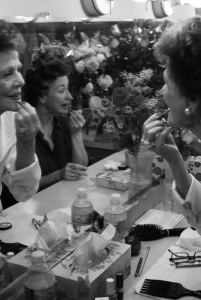 We all played Rose Kennedy (I was the middle-aged one, as you can see). These photos are by Crystal Munson. Don’t you think she should publish them in a coffee table book?

Look at all the roses!

Leonard Stern (the legendary Hollywood producer and Gloria’s husband) sent us each a dozen GLORIOUS roses on opening night. Along with all of the other roses we received from friends, family and others involved with the production, it felt like opening night of the Ziegfeld Follies in that dressing room.

I’m the one in the dark.

Rose, you are a wonder.

This production was my introduction to Theatre 40 in Beverly Hills. By far the most challenging and difficult project in which I have ever invested my energies. You have to generate all of your own cues! You are the only one at rehearsal.

A wonderful scene (the script IS wonderful. Vern Thiessen is the playwright).

SHAKE-SPEARE!
My father is furious.
A Shake-speare!?
.Father.
The son of a glove maker?! The son of a papist who can’t pay his bills?
The son of the WORST MAYOR WE EVER HAD?!
Father please!
What’s he do then?
Tutor! I say, in Lancashire.
LANCASHIRE! Dear poaching papists!
Father!
A TUTOR?! A CATHOLIC!? And a SHAKE-SPEARE?!!
Jesus Christ! Jesus Christ in Heaven!

My biopic about first US Congresswoman, Jeannette Rankin

In this final scene of the film, the bread that Jeannette has been making from scratch throughout the film is magically transformed into a precious baby (very cleverly played by my grandson, Casey Joel).

Patricia Arquette provided her beautiful voice as the storyteller. Judd Nelson was on-camera with me in what is universally described as the best scene in the film. Other luminaries who lent their gifts include Joni Mitchell (she gave us both Woodstock and The Circle Game for the film!), Peter Coyote, Karen Black, Frances Fisher, Mimi Kennedy, Elizabeth Peña and Margot Kidder.

I wrote this play as a response to the October 2002 bombings in Afghanistan. Little did I know that both the play and the war would have such a long life. A Single Woman opened in Fallon Nevada at the Oats Park Arts Center on February 7, 2004. I played Jeannette and Cameron Crain played Everyman. In New York, at the Culture Project, Neal Mayer played Everyman. I continued on my own for another 250+ performances, with Everyman being played, at times, by one brave reader and other times by ensembles of up to 12 actors. 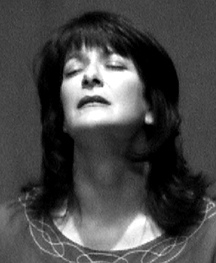 Amigas was a very special project. Emma Sepulveda and Marjorie Agosin, both expatriots from Chile, had recently published a book of their letters dating back to before the horrible Pinochet years. We adapted the book into a two-woman performance with me as Marjorie and L. Martina Young as Emma. It was wildly celebrated. I loved playing Marjorie – she is a poet with a lyrically charming, gentle voice. Her family are holocaust refugees who escaped to the diaspora in South America. So she speaks Yiddish with a Chilean accent. It’s lovely.

2003, The Road to Mecca, Elsa, directed by Zakes Mokae

Quite an experience, working with a South African man who had lived through and experienced Apartheid first hand, and who was very close to the play’s iconic author. Elsa is a interesting (if verbose!) character.

Opened on the 13th of September, only two days after the disastrous events of September 11, 2001. We look surprisingly calm and happy here – probably because it was the show’s closing and a relief, after a run at such a difficult time. Audiences were at home hiding under the bed, rathern than up in Virginia City at the old opera house.

This picture is from the opening dance number. I’m Lady Macbeth and I conjure the production. This scene was choreographed to Bobby Darin singing Mac the Knife.

That which hath made them drunk hath made me bold;
What hath quench’d them hath given me fire.
Hark! Peace!
It was the owl that shriek’d, the fatal bellman,
Which gives the stern’st good-night. He is about it:
The doors are open; and the surfeited grooms
Do mock their charge with snores: I have drugg’d
their possets,
That death and nature do contend about them,
Whether they live or die.

Why, worthy thane,
You do unbend your noble strength, to think
So brainsickly of things. Go get some water,
And wash this filthy witness from your hand.

Nought’s had, all’s spent,
Where our desire is got without content:
‘Tis safer to be that which we destroy
Than by destruction dwell in doubtful joy.

Out, damned spot! out, I say!–One: two: why,
then, ’tis time to do’t.–Hell is murky!–Fie, my
lord, fie! a soldier, and afeard? What need we
fear who knows it, when none can call our power to
account?–Yet who would have thought the old man
to have had so much blood in him.