Annie Get Your Gun

The Corn is Green

Richard (or a visit to a small Plantagenet)

Lots of earlier stuff, including a production of The Fantasticks using ideas based on Poland’s Poor Theatre and a Contact Improv You’re a Good Man, Charlie Brown that I loved. I did a lot of residencies as an artist-in-residence for the Nevada Arts Council and the Sierra Arts Foundation in Reno. I directed kid’s shows and community productions, etc. It was a great time in the field to get to know the people in my community and the kids, who are all grown up now. In fact, the high school kids who were in my first residency, when I was 24, are now over 40. It’s a helluva thing.

Okay, so the one guy is going to look as if he’s in nearly every photo and there’s a reason for that. It’s Roderick Dexter (with the white beard) and I’ve done a zillion projects with him in about 25 years. He’s a great actor.

This doesn’t diminish all the others, but I just thought you’d want an explanation. I’m just saying.

Another thing that might bear a mention is that most of the pics are from my production of Richard III in 2001. It’s just my very favorite all-time show.

Plus, for whatever reason, we just got tons of pictures from it.

I have a shameful lack of photographs of my work. It’s really sad. If you are someone who ever worked with me and you have any good production photos of anything we did, please send them to me! I will be so grateful. 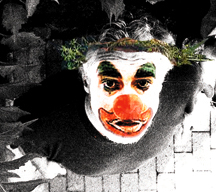